Deep reservoirs of oil, the need for building infrastructure and an open door trade policy to the outside world meant the possibility for a wide variety of global brands to identify prospects in the sand clad lands of the gulf. And for a region that only three generations back was inhabited mostly by nomadic tribesman spelt the beginning of exponential growth, development and prosperity.

By the late 70s/early 80s, the burgeoning trade in the gulf and the huge influx of foreign nationals provided much opportunity for the Spirits industry to make inroads albeit in a very controlled fashion that didn’t upset their cultural and religious beliefs. Many state owned businesses began cementing joint ventures with international beer brands to grab market share; while Scotch whisky became the preferred choice within the hard liquor segment. Highly disposable incomes, a huge population of expatriates and a strong economy meant the right ingredients for soaring consumption year on year. I recollect a survey a few years back mentioning UAE’s consumption toppling that of France to become the largest consumer of blended whisky. But also remember a mention saying this could be attributed to the fact that the gulf was also a trade hub for re-exporting liquor to other regions within Asia and the Pacific.

Scotch whisky exported to the gulf took a pummel at two junctures in the region’s history; one was the 1991 Gulf War and the second being the 2008 Global Financial Crisis. The former meant a huge exodus of expatriates which led to a drop in duty free sales and the latter spelt massive layoffs, budget cuts, bankruptcy, unemployment and reduced individual spending. It did take a while for the gulf to recover from the financial crisis with some regions even today reeling from the damage.

But situations and market dynamics have improved since then and consumption of Scotch whiskey (Blend + Single Malt) by volume and value has grown steadily although it did mean climbing a few hills and trenches. The most recent statistics rates UAE to be at the 9th spot (in terms of value) for the duration Jan-Dec 2014, shifting between the 11th and 12th slots for the years 2011, 2012 and 2013.

*Looking at the current uncertainly in oil prices, God forbid we shouldn’t be heading for a 3rd such juncture; but again only time will tell.* 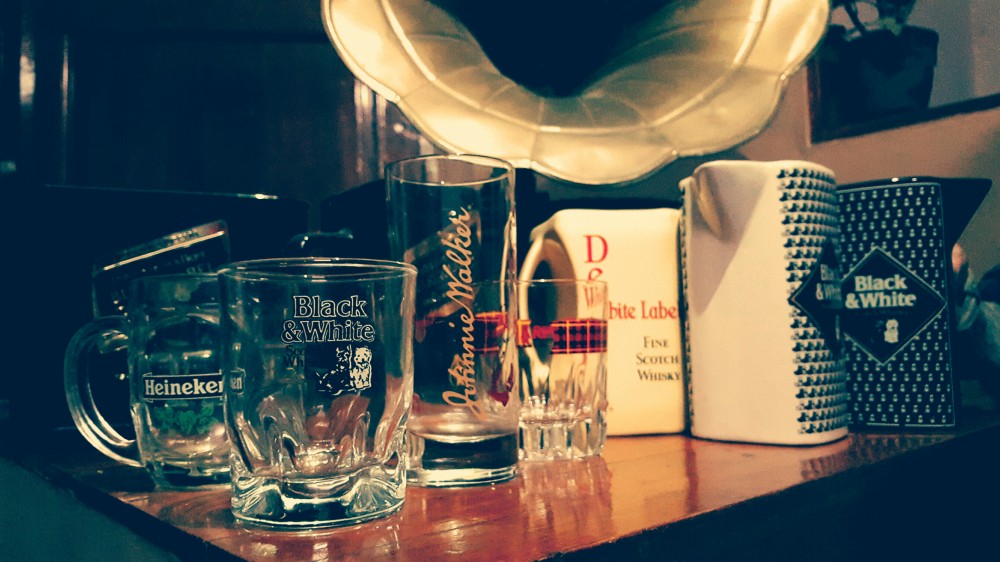 Rewinding back to ‘Scotch-Gulf’ genesis, with major potential and a lack of any kind of market share initially, majority of the distilleries resorted to heavy branding and perks in the form of cups, mugs, jars, whisky glasses, key chains, bottle openers and other gazillion forms of free merchandise; brands like Heineken, Amstel, Haig, Dewar’s, Johnnie Walker and the ‘yin-yang’ like combination of the Black and White Scottish Terriers, the then popular ‘Black & White’.

In many ways, this whisky revolution in much of the Middle East gave an opportunity for foreign nationals, especially those from the indian subcontinent and the APAC regions to be introduced to brands that they might never have heard off! And in some way might have been responsible in spawning this interest of mine, even if it were dormant for a real long time! And how can I forget those Duty Free Outlets…if it weren’t for them I wouldn’t be spoilt for choices which helps feed this rather interesting hobby!