The weekend came with a surprise, in the shape of a nice shiny red box – The Chivas Regal Extra; thanks to a friend of mine who got hold of it at the Duty Free Store. Its absence at the local liquor stores tells me that it’s still being exclusively sold at the airports and not locally, at least not in Pune.

The box and the bottle are very much Chivas, in line with the classic design, but with that extra RED oomph splashed across.

Released in late 2014 and globally early 2015, this was Chivas’ first venture into something new for close to ten years.

The Regal Extra has No Age Statement and is the first from the Chivas’ stables, placed between the 12YO and the 18YO at least in terms of pricing. The mastermind behind this blend is none other than Colin Scott, master blender to Chivas who introduced this expression in commemoration of James and John Chivas, the pioneers of the brand. And though a blend of grain and malt; matured in both ex bourbon and sherry casks, the proportion of malts aged in Oloroso Sherry casks are much higher in this blend giving it that EXTRA added aroma and depth.

To the eyes it seems very light bodied and water like. A swirl reveals the thin legs that taper down the glass walls almost immediately; the color however does tend to darker shades of amber owing to the hues acquired from the aging process. 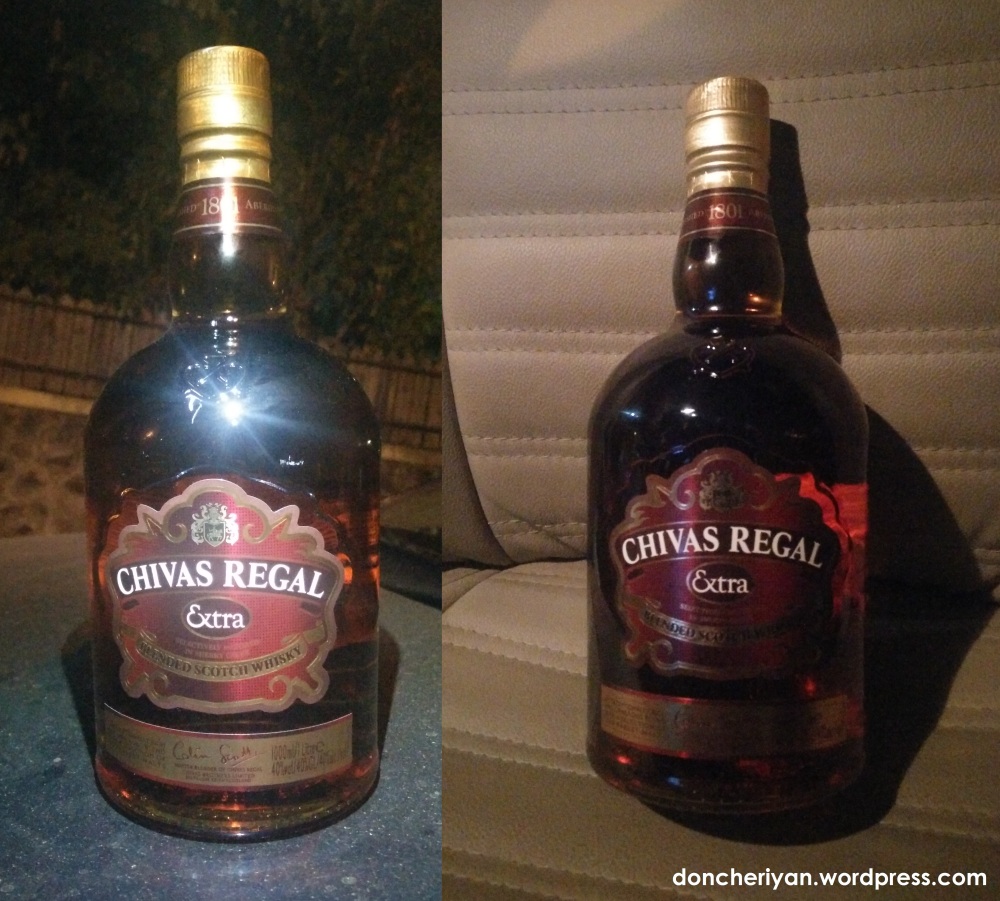 Nose: Sweet caramel accompanied by a wee bit of honey, dark raisins, oak wood and smoke. Hints of spice, peat and cinnamon make a presence along with that signature grainy nature that Chivas brings to the table. Additionally, you get the whiff of sherry but not as much as you would want.

Taste: Not as sweet as the nosing, with the caramel and sherry hovering in and about. The charred wood seems to suppress any peaty tones if existent. Quite fruity with bits of red apples, citrus, peaches and plums that finally taper off to a ginger like feel.

The Chivas Regal Extra does impart those warm, deep flavors that you would expect from Sherry maturation. It’s certainly way ahead of the 12 YO which to me hasn’t rubbed well and has the ability to take you to an almost lip smacking goodness. Unfortunately, this moment of relish is quite short lived as the blend pulls you back to reality leaving you wanting more. I’m not quite sure why but it does beg me to ask the question, is it the sherry notes that weren’t sherried enough!

Bottom line, the Extra is a fruitier, more aromatic relative from the house of Chivas to which diehard fans would certainly take a liking to. For others or at least me, though not a great dram, it surely is a good one!

And finally, I would recommend the blend to be best sipped either neat or with a bit of water; while master blender, Colin Scott advocates a ratio 1:1 of whisky to still water would best reveal those rich flavors.