Great whisky does not have to be top dollar; and to amass a number worthy fan following doesn’t require it to be a single malt either- The Johnnie Walker Black Label. This blended scotch has successfully captured the Highlands and the West Coast with decent complexity without really drilling a hole in your pocket, and it’s been doing so for over 100 years- since 1909!

So when the folks at the distillery wanted to introduce an expression that still kept true to the Johnnie Walker DNA but ‘huffed and puffed’ a lot more smoke and peat, they certainly had an uphill task! With  little to no change to the Black for over a century and the high pedestal it was bestowed, this heavily charred would-be sibling needed to be carefully crafted as its fate laid very simple –  rein in more popularity or fall flat! 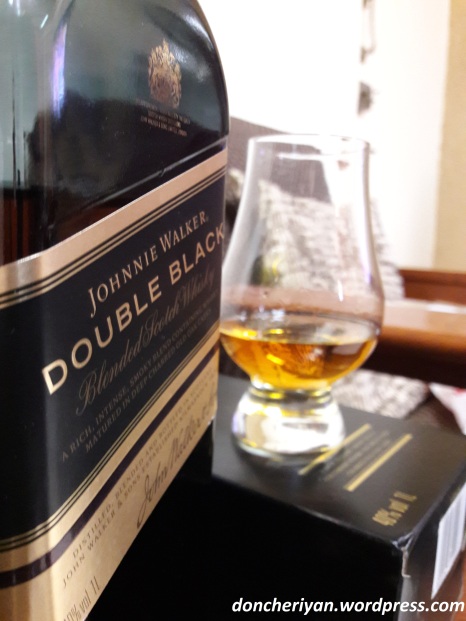 The Johnnie Walker Double Black was the resulting concoction by master distiller Jim Beveridge. Introduced initially in six global travel retail stores – Bangkok, Dubai, Lebanon, New York’s JFK,  Sydney, and Singapore, the expression was later released to all duty free outlets and then globally due to its increasing sales and popularity.

Just as the Black Label: Cardhu, Talisker, Caol Ila find a space within the Double’s spectrum although much of its heart is dominated by the latter giving a richer, smokier and more peaty profile. The whisky as you might have noticed lacks an age statement due to the addition of both younger and older whiskies to achieve that approximation the distillers intended in terms of peat and smoke. Matured in both American and European Casks as is the Black Label, the Double consists of around 40 grain and malt whiskies with the exception being, a longer maturation in European barrels that are deeply charred imparting a fruitier, sweeter whisky that is now a few tones darker than the Black (some caramel colouring too…no doubt).

Nose: Starts sweet with vanilla, caramel and subtle bits of honey accompanied by burnt char, smoke and peat. Gradually being introduced is a rich fruitiness- dry fruits, raisins and rum cake with the mid-range hinting the presence of brine and iodine. Citrusy lime, oranges, pineapples and green apples finally concludes with a pinch of white pepper.

Taste: Quite lush with the presence of malt, vanilla, honey, red fruits, raisins and sherry with traces of grain. Damp wood, a handful of tobacco and specks of charcoal is soon followed by a mild warmth.

The Double Black is Christmas-like, smooth and smoky, not as peaty as you would expect; reminds me of the Smokehead although sweeter. Considering it to be a level above the Black both in terms of its bold opaque bottling and the pricing, I would have expected it to show a bit more maturity, depth and finesse.

To me, the Double’s flavor profile begins to reveal itself slowly, getting elaborate with time only to halt almost immediately leaving you with a short finish. This could be due to the combination of grain, younger whiskies and that sweetness that seems to restrict much of its complexity, leaving it thin with you wanting more. But having said that for the price it certainly isn’t a bad buy and I could see this to be one of those any-day whiskies. It captures the Islays and much of the West Coast for a nominal price; and being a grain-malt blend you certainly need to give it some credit.