A massive face, curly moustache, a thick beard, and colored shades powered by neon lights looked down upon us as we made our way through the entrance and into the mezzanine. What stood before us was most pleasant and a sight for sore eyes. To our left lay this wall, all black and grey, packed with large speakers positioned side to side with a cluster of microphones suspended from the ceiling. In front of us and extending to the right lay these huge shelves which took the role of pseudo walls; each shelf housing either books, audio cassettes, vinyl records, transistors, amplifiers and even an idiot box (‘telly’). But to me one of the highlights was an ‘old-school’ motorcycle hanging – all chrome and vintage blue!

As we stomped up the stairs we were entertained by pictures of ‘Snoopy and Peanuts’ and on reaching the top we found ourselves amused by an array of VHS cassettes, almost shaped like that of a crossword puzzle. The room was lit by a series of vintage bulbs placed along a line hanging from the ceiling and much of the interiors were wood- polished tables, benches and walls with 20th century comics and Hollywood memorabilia all framed randomly, covering pockets of empty space – a certain warmth, almost nostalgic!

For someone in the early thirties at the cusp of Gen X and Gen Y (aka millennials) you tend to find yourself standing in front of crossroads to all that is erstwhile and all that is cutting edge. The lounge was certainly vintage but had a plush of contemporary too!

Effingut! And no I’m not mouthing foul, but rather calling out the name of the lounge!

Honestly, I’ve never been to an official whisky appreciation event, just a few blind tastings with friends and colleagues, so this was a first and an interesting one at that. The session began with a bit of history on John Jameson himself, a Scotsmen who moved to Dublin and took to the art of making Irish whiskey. Lorcan touched on the inspiration behind this move and the story behind the ‘crest and the motto – Sine Metu’ (Latin for ‘Without Fear’). He did stress that the motto in no way encouraged one to be rash or irresponsible but rather emphasized on the will to push ahead while having ‘Little to no Fear’. 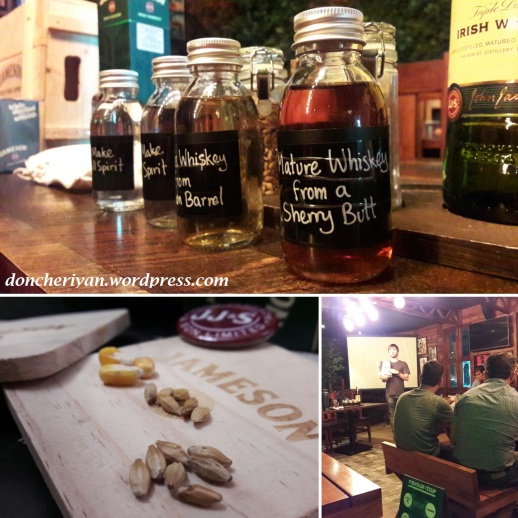 With that, he went on to explain the whiskey manufacturing process – fermentation, distillation and maturation while handing samples of grain, white spirit and those matured in the various wooden barrels to the audience.

And as the samples moved from table to table, it finally landed up on mine. I popped bits of both malted and unmalted barley and could savor a slight creamy sweetness which was virtually nonexistent in the un-malted kind. The sweetness, an outcome of the malting process where enzymes convert starch to sugars was something science had taught me, but this was the first ‘grain in mouth’ , ‘in your face‘ experience!

The raw spirit samples were distinct too, as they were distillates from two different sources- traditional pot stills for malt and the more commercial column stills used primarily for grain. The raw spirit from the copper pot stills gave off a very sweet and fruity fragrance while those from the latter were faint and more flavor-neutral. Pieces from ex-bourbon and sherry butts were the next set of specimens that landed on my table, followed by samples of the actual spirit post maturation. I went ahead and took a whiff of each of these while also admiring the color it had acquired over the three plus years it spent in the barrels.

With that, mics changed hands and John Eapen took centre stage explaining his love for beer and the many experiences he’s had with the spirit in and around the world. Though the folks attending weren’t well versed with whisky, I noticed quite the opposite with beer. People love beer and boy do they know their beers!

And Like all good things, this too had come close to an end. But not until a tasting of Jamesons, a few beer samples and a short quiz. As luck would have had it, I bagged myself a bottle of Jameson Original while my buddy, Rahul got himself a ‘Jameson’ engraved silver hip flask!

To me the forum was more of an awakening, a means to establish an understanding of how one ought to appreciate these spirits while still having a gala time! And I think the folks at Jameson and Effingut did a fine job. Me for one was pleased; I got to experience stuff ‘live’, meet some great people and even got to carry a little ‘something-something’ back home too!

I would like to call out a big thank you to major-foodie and fellow blogger – Rahul Majumdar (* click and be sure to check it out!*) for looping me in on this and the ‘Pune Eat Outs (PEO) FB Group’ for sharing details on the event.