With the preference amongst consumers shifting more towards Malts and blends being their first point of entry, the distillers wanted to capitalize on this growing trend by introducing a breed of both that might help facilitate this transition smoother. And considering it was introduced at a time when the Green Label was temporarily off shelves, the Island Green might have served well as a substitute with it’s ‘mistakable’ similar looking appearance serving as catalyst.

The Island Green is a blend of four malts taken from Scotland’s varied whisky geographies- Caol Ila (Islay), Clynelish (Highland), Cardhu (Speysides) and Glenkinchie (Lowlands) to create a harmonious blend picking up strengths from each of the malts. 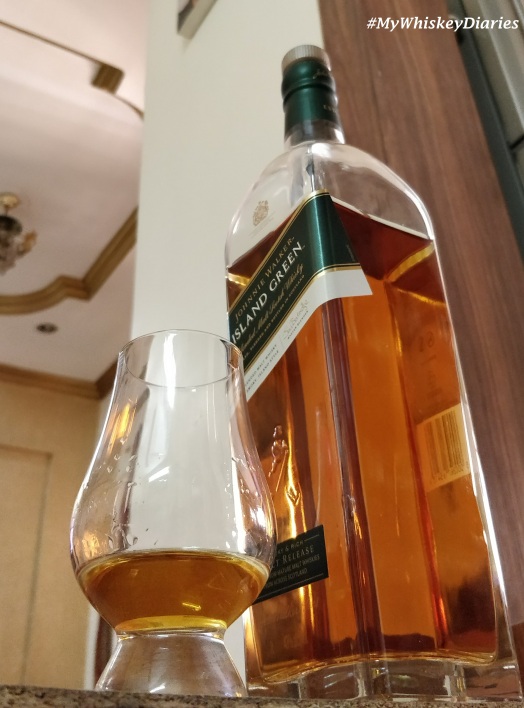 Nose: Light vanilla with hints of honey almost immediately accompanied by peat, brine and earth. Smoke and charcoal overpowers most of the nose initially, however you are soon greeted with the faint sweetness of coconuts, light chocolate and berries followed by a mild spice from that of ginger peels and black pepper.

Taste: Some vanilla with much of the smoke, some ash coming through. Fresh wood and fruity – grapes, raisins and peaches with traces of some grain, light cinnamon and menthol.

Finish: Medium to long – Light smoke lingers on with a dried fruit like sweetness and a mild spice.

On dilution : Briny, sweet and fragrant with layers of caramel and earthy wood. On the palate, the whisky turns more lighter and refreshing with a smack of sweetness, some tart complimented by white pepper, mint and mild wood.

The Island Green is a malted blend with heaps of that signature Johnnie Walker smoke and spice. It isn’t as sweet as the Double Black, a good thing but has a strong smoky, mildly pungent yet sweet character some of which comes from its sherry influence reflecting much of the breadth of the whisky. I find the flavors to be muddled with moderate depth and complexity, but that could also be due to my amateurish nose as there were a few fruity notes that I weren’t able to identify.

The punchy smoke from the Islays, fruit from the highlands, fragrance of the Speysides and the gentle calm of the Lowlands all fused into one blend – the Island Green. I find this whisky far from mundane, delectable, certainly satisfying and a great dram with a fairly decent price tag. This blend is well worth trying if you love some smoke in your tumbler or would want to venture into the world of Islays!

Preference: For those who aren’t accustomed to the smoke and peat, this could be had with a bit of water; else having it neat would do it justice.