Necessity and curiosity together form the breeding grounds for innovative ideas and though an invention might not necessarily be the need; a free, boundary pushing thought process is the ‘new normal’ in an ever changing market. Whisky isn’t any different either, needing to dynamically conform to the vast customer base, ensuring existing and potentially new customers continue to have their lips moistened by the liquid gold we are ever so fond off.

Distillation outcomes differ with different stills, yeast strains ferment the mash differently and maturation either by the sea or deep inland can deliver a wide spectrum of flavors. What was initially restricted to ex-Bourbons and Sherry oak barrels have now extended to Port wine, Piedro Ximenez and Rum cask finishes. And every once in a while you come across another idea that makes it a wee bit better – Beer cask finishing!

The Caskmate was a “Tit for Tat” that worked out quite well! A request by head Brewer at Cork’s Franciscan Well brewery for a few barrels to age their stout had head distiller at Jameson’s thinking of how might these very same stout aged barrels add onto Jameson’s character profile; the outcome was the “Stout Edition”!

The Caskmate was introduced sometime towards the September-2015 timeframe and was received quite well, so much so that they continue to liaise with different breweries and introduce various limited editions. 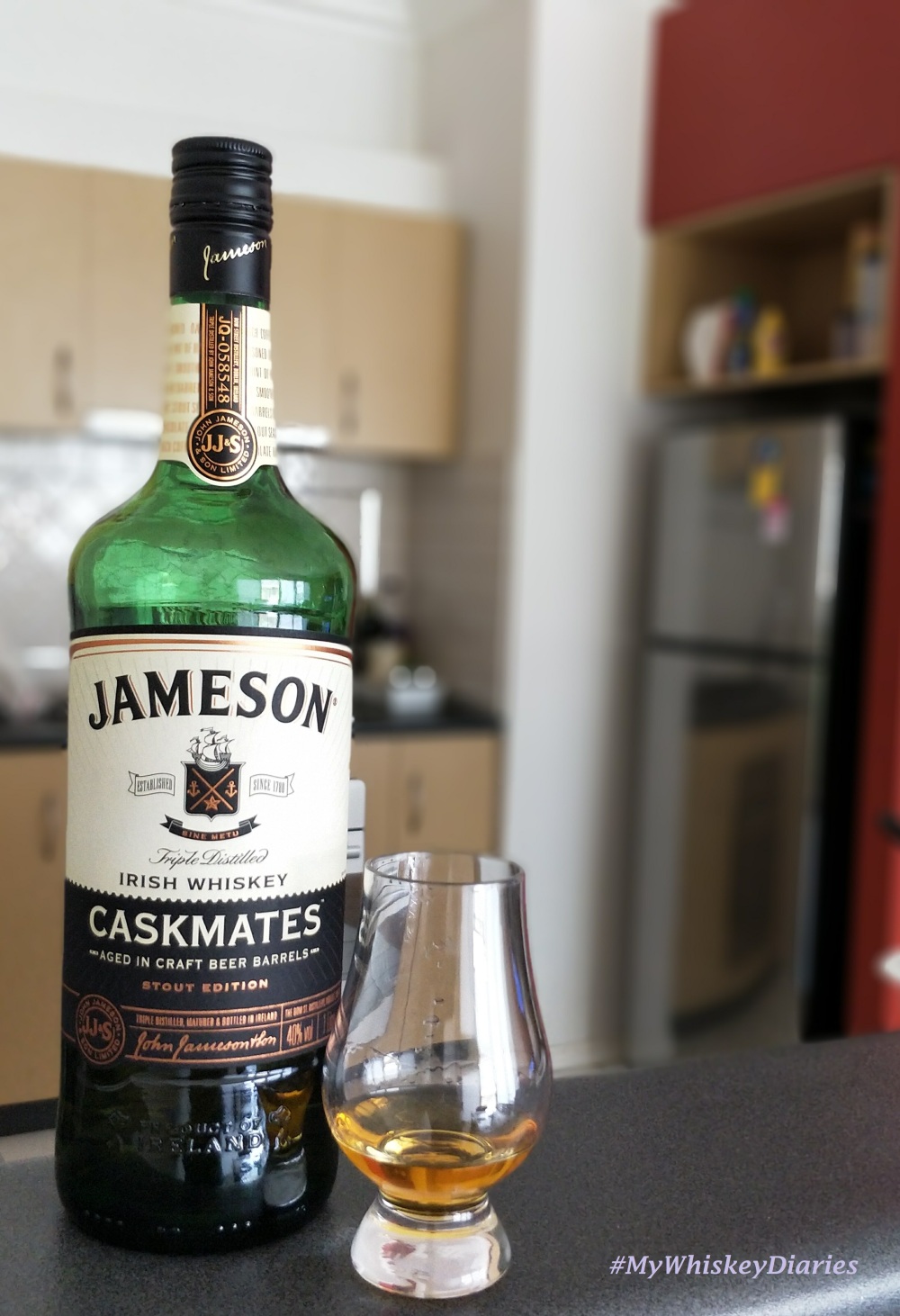 Nose: Caramel, raisins and vanilla infused with barley, moist wood, honey and a light brine; hints of chocolate shavings and coffee beans hover in and around the nose with a mild pungency that soon concludes with the presence of ginger shavings and mild pepper.

Taste: Vanilla and honey enveloped with the sweetness of stone fruits and banana slices, a mild tart like punch, most likely from the hops trailed by bits of cinnamon.

Finish: Medium – Light vanilla and mildly herbal with a bit of spice.

The caskmate is light though not mild for an Irish whiskey. Colour, nose and palate seem bolder while still keeping much of it’s ingrain Irish DNA. For a person who isn’t very stout centric but rather fancies the lighter spectrum of beers, it would’ve been natural that this whisky might as well miss the mark. And to be honest, ironically, I did come in with high expectations and the whisky ultimately didn’t really seem that bad. It wasn’t quite the game changer (although I did wish it to be), but rather seemed to represent more of a mistimed dive, the outcome- a belly flop perhaps! I will give it this, I didn’t quite fancy it initially but as I went through a few more, it did turn out to be enjoying.

The Stout Edition does successfully capture the spirit of the unison between barley and hops, and for the majority this would certainly be a crowd puller as it pulls the best of both worlds, but to me the whisky was just mundane. I wouldn’t mind going in for a second, but it isn’t all that interesting that might make me want to extend my hand the next time I spot one of these bottles on the shelves.

In terms of preferences, you could have this as is or with a wee bit of water; maybe even as a cocktail. My preference would be to taint the whisky with a few drops of water or at least have it left open for a few minutes so as to allow the whisky to breathe.