Saki, incense sticks, honour, kaizen and the way of the Samurai; I’m sure after hearing the second reference you most likely had one of those light bulb moments screaming “Japan”! Oh yes, the Japanese might be famous for Saki and martial arts but there’s a new famous in town! And it’s whisky!

Japan to me has always been a mysterious, intriguing country, home to great natural scenic beauty and fast paced cement forests. Their people are humble, disciplined and have great regard for Honor and Perfection such that, they instill these practices in every walk of life.

Japanese whisky has a history close to a century, and much of its quality not only comes from its lush water, climate and scenic beauty but also from their discipline, sense of perfection and Kaizen. Until the early 2000’s, most of its whisky was concentrated within its borders hidden away from all the fame and fortune. Its birth and a lot of this acclaim goes to Masataka Taketsuru, the pioneer who introduced whisky to Japan.

In the year 1918, he moved to Scotland and worked at 3 distilleries learning the processes and stages involved in the manner by which whisky was produced. He reinforced this knowledge by further enrolling in courses and on his return in the early 1920s, he helped found the Suntory Yamazaki Distillery. Ten years later in 1934, he established his own distillery, Yoichi (Thanks Everyday Asia for the clarification!).

Since Japanese whisky was greatly inspired by the manner in which the Scottish makes theirs, globally there was doubt on whether they would measure up. And measure up they did; whiskies from both Suntory Yamazaki and Nikka won not only renowned critics but also grabbed awards including “Best of the Best”, “Whisky of the Year”, coupled with several Gold medals in the International Spirits’ Challenge (just to name a few).

What’s interesting in Japan is the way they make their blends. In Scotland, distilleries usually exchange their produce with each other. Respective Master Blenders make their blends using these whiskies along with their own which are then sold off. In Japan, this was not feasible as distilleries were very few in numbers and this required them to create their own variations. They achieved these differences by introducing distinctions in the many varied disciplines of making whisky.

Since every stage of the manufacturing process is paramount in giving character and depth to the whisky, variations in each of these would produce spirits of diverse flavor, texture and aroma. Another aspect unique to Japan is the use of Japanese Oak, which an as option was explored somewhere in the late 30’s or early 40’s. This Mizunara Oak is also used in Incense sticks which gives a very distinctive added dimension to the whisky. So you would have the final spirit being aged in Bourbon, Sherry, Port or Japanese barrels. And to add further complexity, they would use a combination of barrels, where the distillate would probably be aged first in Bourbon or Sherry casks and then in the Mizunara oak barrels.

Other variations are introduced earlier on by using different forms of the yeast strains which would alter fermentation from one batch to another. Some distilleries would maintain different shapes and forms of the Copper Pot stills and then vary the temperatures at which the liquor is condensed (image above). Colder temperatures would result in heavier compounds in the distillate while warmer temperatures would result in a lighter spirit.

As is the case all over the world, variations can also be brought by aging the wines differently and by how the elements of nature might play a role on barrels placed in different regions and levels within the warehouse.

Over the last decade, Japanese whisky has gained such exponential popularity that a huge portion of the local produce is now being exported to countries and continents afar. It might be tough to get your hands on a dram, and even if you do, since the demand outpaces the supply, it might cost you dearly!

Moving on to the final of the three brethren, from the Indian Subcontinent: India!

Whisky here has been around for quite a while, almost close to 2 centuries. The British Rule made it possible for Scotch whiskies to be made available. Although initially a luxury among the upper class, it gradually made it’s way to the lower sections of society. And it’s this popularity that gradually encouraged several breweries to establish themselves around the country.

However, with the onset of reduced rainfall and grain productivity, coupled with increased poverty, distillers began using sugar molasses as a way to produce whisky. The country wasn’t short of sugarcane nor is it now, and with the large population it makes it a very cost effective substitution to quench the large demand. A lot of these irregularities in the manufacturing protocols and standards might be attributed to the lack of any guidelines or regulations in making whisky in India.

The good thing is several breweries are now shifting to grain because of the increased demand for good quality whisky among the now spirit savvy generation. However, a large chunk of the market still sells cheap blends which consist of neutral spirits, artificial flavors, colors with only an itsy bitsy bit of scotch, hovering around 15-20%. Shocking!? Yes!! 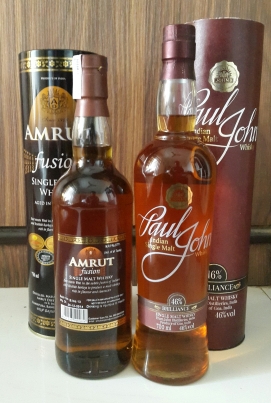 Bangalore looks to be the whisky central of India, with distilleries using copper pot stills and Scottish practices in making the golden brew. One such distillery that has won a lot of acclaim is Amrut; another distillery that isn’t far behind is Paul John from Goa, which also mirrors similar practices. These breweries gather their barley from parts of northern India and even import peated variants from Scotland to produce diverse forms that are bottled and sold across the liquor stores.

Aging in India would generally not cross the five-six year mark; and this is largely due to the angel’s share. The Angel’s Share being that portion that is lost due to evaporation from the oak barrels during the aging process. In Scotland, this share is pegged at 2-3% while in India it might be as high as 10-12% which would result in an almost empty barrel if left to age for anything beyond seven years. It’s the humid and warmer temperatures that aggravate the angel’s share, but it’s these very elements that speeds the maturation process and allows these ‘younger’ whiskies to hold their ground.

Realization among-st the middle and upper middle class in India is in a sense responsible for encouraging the many smaller newer distilleries in producing quality whisky. And i’m ever so hoping to see a couple more quality breweries exposing themselves in the years to come.