Islay whiskies have a charm about themselves, be it the cold sea breeze or the near silence that surrounds you only to be broken by water brushing against the shore. To the avid scotch enthusiast the region’s produce is considered to be scotch-epitome; home to mighty peat monsters like the Octomore series humbling even the most peaty bottlings down to nothing more than malty pulp. Think Islay and you have a myriad of thoughts streaming into that space between your ears – maritime, peat, brine, smoke, seaweed and so on.

But not all that comes out of the region are peat affinite! Home to the Octomore expression is also a bottling that is on the opposite side of the spectrum, totally void of peat – Bruichladdich. Older bottlings might not have followed suit, but these have been discontinued with time. It is only the Port Charlotte and Octomore labellings that come with dollops of peat!

The Laddie Eight, this week’s malt rush is an eight year old bottling from the Bruichladdich stables, and as you might have guessed, with zero peat being used in the manufacturing process. The expression was released at Travel Retail Stores sometime in April, 2014 and so availability might generally be a hit or a miss. As is with most whiskies, this Laddie is also matured in a combination of ex-bourbon and European sherry casks but at warehouses looking over Loch Indaal – harnessing all the maritime in all likelihood!

The distillery is no stranger to young wonders, many of their amature spirits have garnered several awards and been at the receiving end of many standing ovations; so it is with high hopes that I enter into this review…

Nose: Caramel and butter, barley with the zest of orange peels and the mild tart from red apples, a richness similar to that of run ‘n raisin cake and dark chocolate mixed with oak wood, minerals and char.

Taste Vanilla, brown sugar and wood infused with an array of fruits – kiwi, red grapes, dates and plums cupped by a wave of brine, seaweed and some moss. 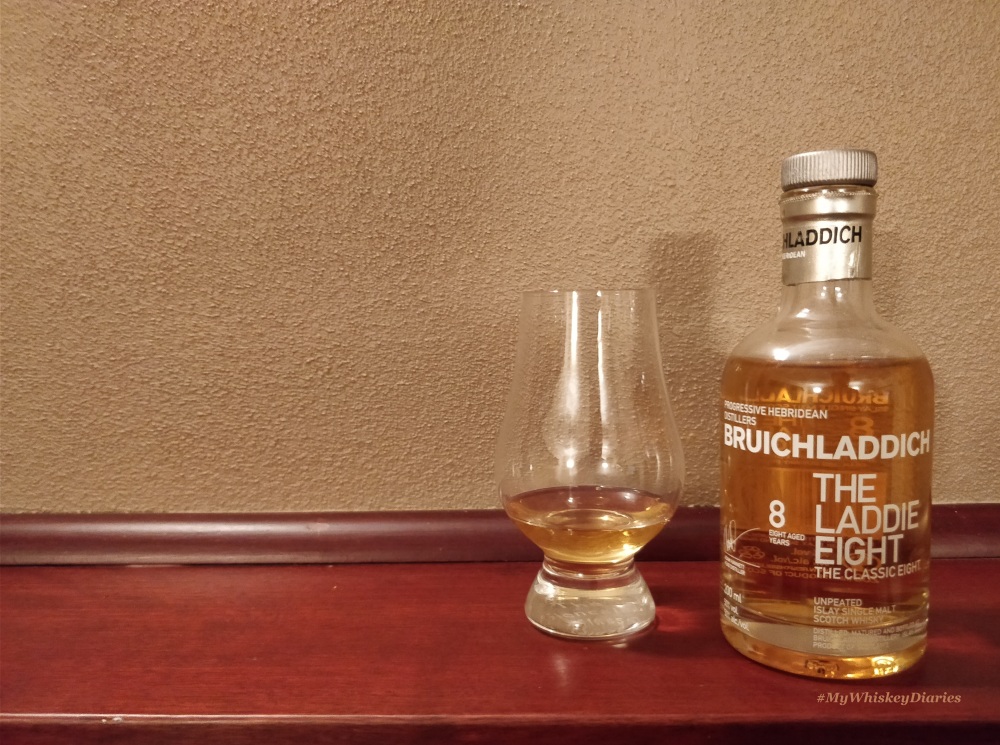 Bruichladdich reminds me of the salty sea breeze, rich and abundant considering it’s very young age. Its fruity amalgamation of flavours together with the mineral-seaweed combo conjurs a richness that makes it a pleasant sipper. The higher than usual strength, typical with Bruichladdich doesn’t knock your socks off and the fact it being non chill filtered with no caramel colouring is an added bonus.

The whisky is young and spirited, and draws several parallels to the Laddie Ten. The expression is a clear indicator that younger whiskies don’t necessarily need to find its place in the kitchen sink hole. It’s fun, light and yet strangely complex. Now, this might not be a smoke bomb nor a sherry show off; but it’s got enough of bells and whistles to make you want to point to that bottle, flash your boarding pass and reach out for your wallet.