A canvas, pitch black with a plethora of dim neon white lights and the brush of ivory hue extending from one corner to the other. Swords, all green pointed in a multitude of directions with glass crystal shards scattered across and a cloud of earie mist hovering silently outwardly over this plane of dark fluid-metal. The night was silent except for the breeze that brushed against my ears, it was cold but comfortable. The beautiful night sky, the dew ladden grass, and the still shiny water, serene and though quite alien was pretty much how I summed up the night at Margaret River.

The morning was dazzling with an amalgamation of red over the horizon as it transgressed to a light blue, blotched by white patches extending across the sky. The view of rich fauna and green flora, hugged by vast expanses of wineries and stacks of hay was indeed a pleasure and a treat. A handful of chocolates, some wine, freshly prepared jam, the coastlines along Augusta and to be greeted by dark clouds and a bit of a drizzle was a brief of my weekend trip. And though we reached home late, bringing an end to our little wonder weekend, the day only came to a stop once I snuggled comfortably into my couch sipping on some smoky rich Laphroaig 10!

At around 45 ppm this Laphroaig is quite the heavyweight; the distillers here heat the peat at low temperatures, hot enough for it to release its flavours but not too much to completely dry the malted barley. This exposure averages anywhere between 12-13 hours, extending to as much as seventeen depending on the type of bottling. The barley is then air dried to completely halt the malting process. The distillery is one of the very few that malt their own barley- opening windows and continuously turning the grain by hand across large malting floors to ensure temperatures are kept consistent.

What is unfortunate though is the fact that the distillery achieves that consistent golden hue with the addition of artificial caramel colouring; quite evident considering it is exclusively matured in first fill ex bourbon casks. But the dissappointment is in the chill filtration, stripping more of that uniqueness that comes from maturing the brew. 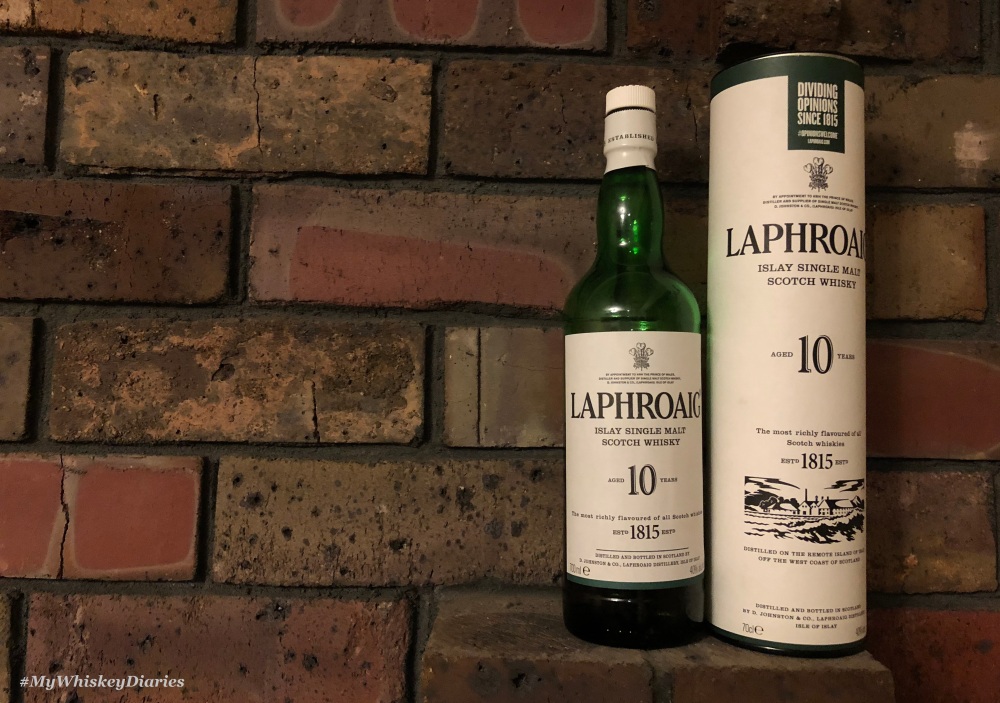 Eye : Between amber and deep gold

Nose: A rush of seaweed and brine at first, though still sweet and rich with vanilla, honey, butter and cream. The hint of coconut shavings over pineapples and bananas infused with floral undertones make a subtle presence in the midst of the more omnipresent charcoal and peat. Surely some leather and meat jerky along with the richness of sherry, which slowly tapers off with moss, green pepper and ginger shavings.

Taste : Much of the peat and char comes through straight to the palate accompanied by olives, sea salt, and seaweed. Barley, caramel toffee, raisins and melons find some solace in between the mishmash of leather, ash and smokey wood. There is the spice from ground white pepper that makes a presence albeit towards the end.

As the whisky opens up, a lot of the smoke and seaweed begins to mellow down with the more fruity and floral aspects singing through.

Finish : Long – charcoal, iodine and brine with the sweetness of a glass of red wine. 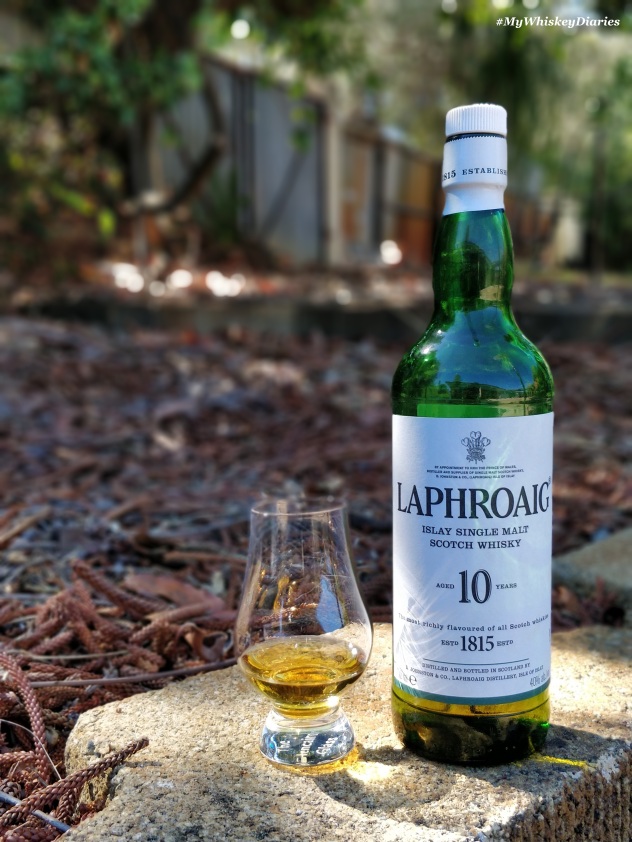 Never could I imagine chewing on damp cigarette buds, sitting by marshy, wet vegetation with the smoke from a dying wood fire be ever so appealing. I might have gagged the first time I tried the Laphroaig 10; but that is surely not the case now! This might not be your daily go to dram and its aggressive profile might not fit to everyone’s liking. But once you see the light, there’s little to nothing the furry moth can do – let go, save up some real estate in your bar cabinet.

The Laphroaig is unique, rustic and moorish, with a flavour profile different from its other close Islay inhabitants; possibly because of the control they have over their grain. From malting the barley using the peaty waters from the Kilbride reservoir, to regulating the temperature within the malt floors, to halting the germination process by provisioning heat from locally sourced peat.

Whatis also interesting is the presence of dried fruits and sherry that pop on the palate and the nose- funny enough considering the lack of European Oak maturation!

Alas, the modus operandi, I would choose to sip this neat; but mildly diluting it with a teaspoon of water would still allow the whisky to hold some degree of structural integrity.

A special mention and my utmost gratitude to my good friend, Rajesh for the ‘Froaig 10!